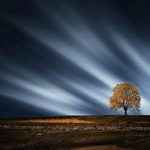 I recently watched an engaging debate between young and old earth creationists. The animated speakers knew their material well and expressed themselves with grace, even as they remained oblivious to the elephant in the room. The shy pachyderm sat quietly in the corner until they introduced arguments involving the speed of light when, weary of being ignored, he reared up and tossed a chair in their general direction. Neither debater seemed to notice.

Assumptions matter a great deal, especially when they involve how we view, interpret, and make judgments about the origin of the universe. Neither of the debaters appeared to notice that their discussion of the speed of light was founded on a significant blind-faith assumption of unbelief—the uniformity of nature or “natural laws.” The old earth proponent argued that light from distant stars requires billions of years to reach the earth. The young earth proponent countered with examples of how scientists have altered the speed of light under certain conditions, indicating it could have arrived sooner than the old earth scenario. But, here lies a problem. The speed of light reveals nothing about the age of the earth.

The universe operates by the will of God who created, ordered, and upholds it. What we call “natural laws” are no more than how God orders and governs what He created and sustains at any given time. The universe and its “laws” have no life of their own. Moreover, God exists independently of His creation and cannot be limited by its properties. Or, better, nothing requires God to order reality, including light, the same way yesterday as He does today. God can do as He pleases when, where, and how He pleases. And if some think that God is limited by the properties of what He created, orders, and sustains, we must ask: Says who? On what authority? Limited people that can’t know the contents of their neighbor’s garage unless they have a look cannot know the nature of an infinite God apart from His revelation. And the God on whom we depend for all knowledge and truth has clearly told us He has no limitations: “Behold, I am the LORD, the God of all flesh; is anything too difficult for Me?” (Jeremiah 32:27).

Believers reasoning by biblical assumptions about the world easily accept the miracles of Scripture as historically true and need not resort to “natural” explanations. God can easily rearrange reality and do anything differently than what we observe today. He made everything from nothing and can order it however He desires. The atheist, however, views “nature” (though founded on random chance), as self-created, uniform, and unchanging in its “laws” or operation—a blind-faith speculation founded on hostility toward God’s authority.

We easily dismiss the unbelieving assumption about “nature” when we affirm the miracles in Scripture, when we speak of God creating the earth from nothing, or when we accept that God created us and we depend on Him for knowledge and truth, including how and when He spoke everything into existence. Why, then, do we accept the same assumption when we appeal to the speed of light as evidence for an old earth? Do we really want to say an infinite God who spoke everything into existence from nothing cannot make light from stars visible on earth the day He created them, that His actions are limited by the speed of light? On what basis would believers say that God has limitations, does not control creation, or is no higher than that which He made and upholds? And why would those arguing for a young earth need to show that the speed of light can change to make their case? Arguments for the age of the earth based on the properties of light are useless in light of God’s infinite power; He cannot be limited by what He created and sustains.

The same principle applies to supposed “scientific” arguments that cannot be demonstrated scientifically, including appeals to the properties of “nature” to argue for or against something God has told us in Scripture about His nature and acts. For example, our experience of time says nothing about God’s ability to know the future or to be in time and out of time at the same time. Again, God can do anything, He transcends the universe He created.

All Christians, including apologists, need to take care that our views do not rest on unbiblical and unjustified assumptions of unbelief. We need to expose and refute them, not adopt them.

Our approach to Scripture must always begin with a proper humility before our infinite God, bowing to the source and sustainer of all things, on whom we depend for everything, including knowledge of the origin and nature of reality and His acts in history. Science, as conducted by finite scientists, does well discovering and describing what can be demonstrated, tested, and repeated, but cannot speak with authority beyond its limited purview. Like God’s censure of Job, where were we when God “laid the foundation of the earth” (Job 38:4)? We do best to avoid speculation that incurs the same rebuke. God, alone, knows all things, and has revealed to us what we need to know about Him and His universe. We should know our limitations and listen: “‘For My hand made all these things, thus all these things came into being,’ declares the LORD. ‘But to this one I will look, to him who is humble and contrite of spirit, and who trembles at My word’” (Isaiah 66:2).

Yes, I Want a PDF of “Light and the Age of the Earth: An Example of False Assumptions”