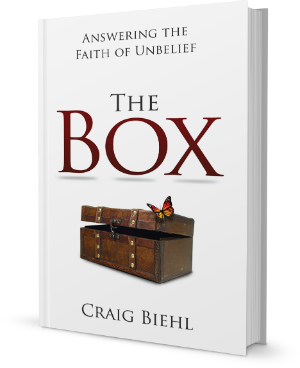 Could it be that Christian faith is neither blind nor unreasonable, while the best arguments of atheism and agnosticism are built on unsupportable leaps of blind faith? The results may surprise you. — From The Box

The assumed ability to make “authoritative” assertions about that which cannot possibly be know apart from omniscience or a direct revelation from God is basic to all atheistic arguments. — From The Box

The Box (“a caixa”) is now available in Portuguese from Editora Jocum Brasil at http://www.editorajocum.com.br/p/415/a-caixa—craig-biehl – See Image

“This is a great book to share with a non-Christian inquirer. Written as a dialogue between a Christian and an atheist, it is enjoyable to read, and its presuppositional argument for the truth of Christianity is cogent. I hope it gets a broad circulation.”—Dr. John M. Frame, J. D. Trimble Professor of Systematic Theology and Philosophy, Reformed Theological Seminary

“A solid defense of biblical Christianity against the claims of atheism and a practical and orthodox response to the challenges of the vocal advocates of unbelief in our times.”—Dr. William Edgar, Professor of Apologetics, Westminster Theological Seminary

“Craig Biehl is a scholar, but one who speaks in plain language in defense of the authority and reliability of the Bible and its teachings. The Box debunks denials of biblical truth by exposing the flawed assumptions which underlie them, boosting our trust of Scripture and providing us with useful tools to defend our faith against scholarly attacks.”—Bob Deffinbaugh, Ministry Coordinator, Bible.org

“This is a wonderful help. Its reasoning is tight, but it is ‘popular’ enough to be helpful for virtually anyone. Really a nice work.”—Dr. Fred Zaspel, author of The Theology of B. B. Warfield

“Craig Biehl’s The Box is a useful and beneficial introduction to doing consistent, biblical, God-glorifying apologetics by responding to those who reason from a naturalistic or humanistic worldview. In a day when the Christian faith is under fire from all sides, such a resource is most welcome and needed.”—James White, Director, Alpha and Omega Ministries

“Biehl’s book is impressive. The dialogue is a helpful and interesting approach that makes apologetics more accessible. There is so much to which I could point that I consider to be good and even striking that I think it would be pedantic to list them all.”—David McWilliams, PhD, Senior Minister, Covenant Presbyterian Church, Lakeland, FL

“A marvelous book. I am delighted by the thought of college students reading this as they tread through the deep waters of unbelief on the college campus. Craig does a wonderful job of boiling down unbelief and of demonstrating the commonality between atheism and agnosticism and the fact that all believers can and should interact well with unbelief. I am grateful for this labor of love for Christ’s church.”—Dustyn Eudaly, Associate Minister, Holy Trinity Presbyterian Church, Orlando, FL

“Atheists and their less dogmatic cousins, agnostics, are making a comeback today, at least in Europe and North America. In some places, moreover, they are given the moral high ground and assumed to be chic. But as Craig Biehl has shown, they are undermining any and all standards of morality, and even rationality. Now more than ever, Christians need to understand this and encourage one another to stay fixed upon Christ. Read this book and rest assured that, in the words of the old hymn, ‘all other ground is sinking sand’.” —Dr. Douglas A. Sweeney, Professor of Church History and History of Christian Thought, Trinity Evangelical Divinity School

January 2, 2015 – Thank you to Christian St. John for his review at www.christianreview.com.

December 29, 2014 – Thank you to Fred Zaspel for his review at www.booksataglance.com.

November 21, 2014 – Thank you to Christian St. John for sharing our book news at www.christianreview.com.

TV Interviews about The Box

Faith-Building Truths in The Box

Below are a few samples:

One must know everything about the universe and beyond to justly claim that God does not exist.

Atheists unwittingly presume for themselves the omniscience of the God they deny when they claim that He does not exist. No human can possibly know that God does not exist.

Human experience and knowledge can’t be the final authority of what God can be or do in His universe.

Because we cannot see or understand something does not make it untrue. Most folks have never been out of their country, let alone to the other side of the universe or beyond the three or four dimensions of their existence. Human experience and opinion are inadequate standards of truth about ultimate questions and realities.

Miracles are reasonable and logical.

The God who can speak a universe into existence and order and sustain it every moment can part the Red Sea and sustain a prophet in a whale. Miracles are logical and reasonable in a universe created and run by a God of infinite power.

The ongoing ordering and sustaining of every particle and physical law in the universe is a greater miracle than the supernatural acts of God in Scripture.

It is quite unreasonable to deny the miracles of Scripture while maintaining that the order and design of every atom in the universe is founded on random chance. God’s ongoing ordering and sustaining of the universe requires immeasurably more power than all of the biblical “miracles” combined.

Is Christian faith reasonable and justified while the best arguments of atheism and agnosticism are no more than unjustified opinion? The answer will inspire you. The amusing banter between Mr. A and Mr. C get to the heart of the matter when Mr. A humbly admits his inability to know the contents of Mr. C’s antique box while claiming to know that which requires knowledge of everything in the universe and beyond. In a single breath Mr. A went from a reasonable confession of his human limitations to presuming the omniscience of the God he denies. In this Mr. A displayed his atheism (and later agnosticism) to rest on faith in an ability to know what he cannot possible know. When Christians see how and where this misplaced faith underlies the most sophisticated arguments of unbelief, they can better appreciate the reliability of faith in Christ, stand firm and unintimidated in the face of all unbelieving arguments, and respond with greater grace and peace.

Mr. A’s nightmare was small potatoes compared to Mr. C’s little antique box. Why did Mr. A convert from being a confident atheist to a rather non-committal agnostic? Mr. C didn’t fit the stereotype of an ignorant hypocrite and that bothered Mr. A, but why does he now doubt his once unflinching ability to make reasonable claims about the existence of God? And why has the thought of a possible afterlife begun to give him the heebie-jeebies? The little brown box had shaken him to the core. Was he really a man of faith, and blind unjustified faith at that? And so it is that Mr. A sits on a pile of dirt in his garden contemplating the meaning of his life.

Leaving Mr. A for a moment, imagine happy young Christians prancing off to college to find everything they hold dear mocked and dismissed as nonsense. “Jonah in a whale? Humanity saved in an ark?” And with a raised eyebrow and peering over the eye glasses, “you don’t reeeally take the Bible literally, do you?” It can be a bit intimidating. Imagine four concentrated years of this from professors and classmates. Can the joy, assurance and faith of believers survive and even thrive in such an environment? Can our joy, assurance, and faith survive and thrive in the sea of unbelief that surrounds us?

Atheists and agnostics pride themselves on being reasonable and scientific while viewing Christian faith as blind and unreasonable. But could the opposite be true? Could Christian faith be neither blind nor unreasonable while the best arguments of atheism and agnosticism rest on unsupportable assumptions of faith? Moreover, could the toughest arguments against faith in Christ become the means for stronger joy, assurance, and faith in Christ as we recognize the blind and unreasonable faith of unbelief in the best of its proponents? Indeed they can.

All arguments against the existence and nature of God, whether the “problem of evil” or the impossibility of the Trinity, can easily be exposed as resting on the same unreasonable assumptions of blind faith. When Christians learn to see and understand these assumptions, they are not only equipped to refute the most difficult arguments of unbelief, they will be encouraged in their faith in Christ and Scripture, and inoculated against intimidating arguments that would steal their joy and assurance. 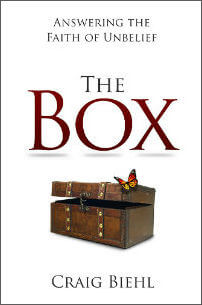