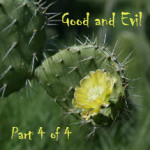 We come to our fourth and last post on the relationship of good and evil. Scripture clearly teaches that God displayed His glory in the person and saving work of Christ. In fact, nowhere is God’s glory more clearly seen than in Christ. Does it follow, then, that evil is necessary for God to display His glory? After all, Christ displayed His glory by saving sinners. To answer this important question, we need to distinguish between two entirely different things, namely, God bringing good from evil, and God doing evil that good may result. The former is true while the latter is blasphemy.

To begin, God’s glory as dependent on evil makes God dependent on that which is most contrary to His character to accomplish His purpose to display His glory. Put another way, it says that God is independent and needs nothing, except evil; He needs evil to accomplish His will. After all, God displays His infinite glory by saving evil people. Yet, again, we must distinguish between God bringing good from evil and God doing evil to produce good.

Christ displayed God’s infinite excellence by bringing infinite good from infinite evil. Yet, Scripture strongly condemns those who say “let us do evil that good may come” (Romans 3:8). God is perfectly righteous and cannot do moral evil for any reason. “The Rock, his work is perfect, for all his ways are justice. A God of faithfulness and without iniquity, just and upright is he” (Deuteronomy 32:4 ESV).

Imagine God unjustly condemning billions to eternal suffering to display His goodness to a few. The thought is repugnant in light of God as holy and righteous. “As I live, says the Lord GOD, I have no pleasure in the death of the wicked; but that the wicked turn from his way and live” (Ezekiel 33:11). Does a mass murderer display goodness by sparing a few, or does someone beating an innocent animal display his good character by dressing the wounds? Are you impressed with such “goodness”? Is this really God’s glory? In attempts to understand God’s sovereignty and holiness in light of the existence of evil in the world, we should always remember that God’s sovereign rule is a holy rule; God’s foreordination of all things is a holy foreordination. God’s holiness makes His power and rule good and beautiful. Satan’s power is evil and ugly precisely because it is unholy.

Moreover, if God does moral evil to produce good He would be guilty of that which He condemns in others; His critics and despisers would be correct in their accusations against Him. Christ’s redeeming work would be a mockery of God’s excellence if He suffered for that which God is blamable, produced by God’s dependence on evil. The Gospel would be turned on its head and the glory of God tainted beyond repair. Satan’s ongoing blasphemies would have merit and Adam and Eve would have been correct in affirming the serpent’s lies. God commanded Adam and Eve to not eat of the tree lest they die. But did God secretly want them to sin and die, along with the billions Adam represented? Was the serpent correct in calling God disingenuous with malicious motives in His command to not eat of the tree? The thought is blasphemous. Are we really to doubt God’s word as Satan would have us do? May it never be!

In the end, the refusal to accept mystery in light of God’s perfect excellence creates great problems and leads to a denial of God’s perfections. In Christ we have God’s glory on vivid display, including His holiness, righteousness, and infinite hatred of evil. Christ endured infinite suffering that God might be just in justifying the ungodly (Romans 3:21-31). God could not compromise His perfect justice one iota to save a single soul. He upheld His righteousness in saving sinners at infinite cost to Himself. Therefore, God has provided all we need to know His perfect character. We can rest in His infinite goodness, while speculation beyond what He has revealed will lead us astray. 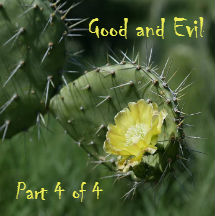 Yes, I Want a PDF of “Does God Require Evil to Display His Glory?”