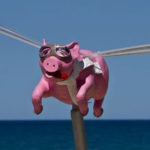 Many, many moons ago, a company where I worked built a new multi-million-dollar facility in a large and popular business district. The wings of the new building wrapped around a beautiful courtyard with well-groomed flower beds, trees, benches, and a path that wound its way past an assortment of sculptures.

The trees and flowers were traditional, with great design, symmetry, color coordination, and life, while the artwork was decidedly modern, bearing marks of random and eccentric license, with a dash of the absurd. Of course, the latter may have been the point. I recognized one the objects as having been outside the art building of the university I had attended a few years earlier. “The Chair,” as we affectionately called it, was a block of cement or stone fashioned into what looked like a square bean bag or crude throne, though I never saw anyone sit on it. Somehow it found its new home in the courtyard. One piece, which some affectionately called the “Lincoln Log,” showed great skill in the display of unclad images in a brown cylinder that resembled, well, a very large Lincoln Log. A Michelangelo it wasn’t, but neither did it deserve the unfair label of “space junk,” as I called it, given I knew very little about space junk.

The budget for the art collection was large, so I imagine the piece with the granite rocks sitting on a rusted metal frame conveyed something beyond what it looked like and fetched a pretty penny. It was simple enough, and anyone with a drill and some bolts could have attached the rocks to the frame, but few could have done so and sold it for a large sum of money. It seems I had underestimated the artists.

My reflections on the courtyard followed a recent reading of Francis Schaeffer’s How Should We Then Live, a brilliant examination of the importance of the Christian worldview in the history of Western Culture, how we arrived with our present culture, and how the loss of our bearings as created by God in His image finds expression in the arts.[1]

While I have yet to fathom the beauty of modern art, I can appreciate it as a cultural barometer, a statement of philosophy or worldview. In The God Who Is There, Schaeffer tells the story of John Cage, a modern composer who attempted to write, play, and direct “music” according to his worldview of a random chance universe. The result was either noise or silence. Cage was sometimes booed after performances and even had an orchestra hiss at him when he took his bows at the conclusion of a concert. Schaeffer observed that when people booed his work they booed the logical conclusion of his worldview of a chance universe “as it [struck] their ears in music.”[2]

People love symphonies precisely because they do not reflect the worldview of a universe founded on and operating according to random chance. They like beautiful art, flowers, and anything aesthetically pleasing for the same reason. I believe that as we grow in our awareness of the genius and beauty of God displayed in His works, even as corrupted by The Fall, we will become less attracted to art and music that reflects a fractured and fallen worldview. Beauty, like goodness, is ultimately determined by God as that which most closely resembles His beauty. And the more we love God, the more we love the things that reflect His excellence.

As believers, then, we should resist the temptation to relativize culture, including art and music, as if all forms are equal. Appreciation may lie in the beholder, but beauty lies in resemblance to the beauty of God and His handiwork. A Bach concerto written to the glory of God with great skill and genius is superior to a drunken Karaoke bit with an equally drunk garage band. A Michelangelo surpasses in genius and beauty the playdough creations of a three-year-old, even if we love them as created by our kids. When kids grow up, however, we should expect their art to mature along with them.

Some things more closely resemble the beauty of God and His works, while others reflect our fallen nature and immaturity. Determining where one ends and the other begins in art can be difficult, but the difficulty in no way implies that all things equally reflect the beauty of God and His creation. Therefore, as we strive to conform our thoughts and actions to the holiness of God, so in our art and music we should strive to more closely portray the excellence of God’s beauty as reflected in His character and works.

[1] Francis A. Schaeffer, How Should We Then Live? The Rise and Decline of Western Thought and Culture (Old Tappan, NJ: Fleming H. Revell Company, 1976). 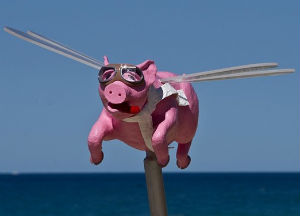 Yes, I Want a PDF of “Art, Space Junk, and Ultimate Beauty”