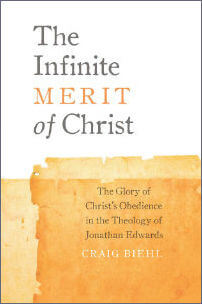 Christ, in His incarnation, life, death, and exaltation, is God’s great instrument in the manifestation and communication of His excellent perfections. (38)   —From The Infinite Merit of Christ

God delights in His creatures insofar as they display His own holiness and happiness communicated to them. (36)   —From the The Infinite Merit of Christ

“While setting the record straight on Edwards’s theology through leaning heavily on his own writings (800 quotes from Edwards!), Biehl’s work is also a tour de force for the confirmation of Reformed orthodoxy in the midst of ongoing debates about justification today.” —Joel R. Beeke, President and Professor of Systematic Theology and Homiletics, Puritan Reformed Theological Seminary

“I absolutely love this book. I like everything about it from the page design; to the flow of Biehl’s (and Jonathan Edwards’s) logic; to the conclusions Craig Biehl draws from his careful analysis of Jonathan Edwards’s writings. Biehl provides a helpful rebuttal to several currently-popular points of view that have (for various reasons) downplayed the importance of imputed righteousness and rejected the significance of Christ’s human obedience to Moses’ law. This is a book to be reckoned with in all those debates.” —Phil Johnson, Executive Director, Grace to You

“Craig Biehl’s work offers just what is needed today–a comprehensive treatment of Edwards’ understanding of Christ and His saving work of redemption. Few of the leading Edwards scholars know Reformed theology well, or understand the significance of Edwards’ soteriology. Biehl can help us all to see what mattered most to Edwards. Along the way, he can help us with the debate on justification, which Edwards handled better than most thinkers, past or present.” —Douglass A. Sweeney, Professor and Chairman of Church History & History of Christian Thought; and Director, Jonathan Edwards Center, Trinity Evangelical Divinity School

“Craig Biehl has done both American historiography and the global Christian church a great service by demonstrating conclusively that Edwards did all of his work from within “his Biblicist, exclusivist, evangelical and Reformed tradition.” Specifically, Dr. Biehl masterfully analyzes how and why “the person and meritorious work of Christ in redeeming sinners” is “the center” of all aspects of Edwards’s theology. For those who would understand either Edwards or the essence of Christian theology, this book is a MUST!” —Samuel Logan, Associate International Director at World Reformed Fellowship and Former President of Westminster Theological Seminary

“While some recent studies have explored novel takes on Jonathan Edwards’ thought, Craig Biehl reminds us that first and foremost Edwards is a theologian and that first and foremost Edwards’ theology centers on Christ. Christ’s glorious work of redemption captivated Edwards’s mind and heart and, thankfully for us, permeates his writings. Biehl’s careful hand skillfully guides us through these writings, even leading us to offer words of praise for what Christ has done for us-a rare and admirable feat for a piece of scholarship.” —Stephen J. Nichols, President, Reformation Bible College

March 30, 2016 – Thank you to Books At A Glance and reviewer Jeffrey C. Waddington for their review of The Infinite Merit of Christ.

July 23, 2015 – Thank you to Books At A Glance for their review of The Infinite Merit of Christ.

More Quotes from The Infinite Merit of Christ

God is glorified to a greater degree when His creatures not only see the display of His glory, but ‘rejoice’ and ‘delight’ in His glory, as that very delight is the Holy Spirit dwelling within the believer. God communicates His glory ‘that it might [be] received both by the mind and heart.’ (32)   —From The Infinite Merit of Christ

God accomplishes His ultimate purpose to display and communicate His glory to His creatures in His glory displayed in the person and redeeming work of Christ, and in the giving of the Holy Spirit to believers by whom they love and rejoice in the excellence of the Son and the Father. Consequently, God’s ultimate purpose to glorify Himself is one and the same with His purpose to communicate His happiness to His creatures, the whole of which is accomplished in and through the person and redeeming work of Christ. (37-8)   —From The Infinite Merit of Christ

In all things, Christ is the means by which God manifests His glory. (40)   —From The Infinite Merit of Christ

For the death of Christ not only satisfied the required penalty of God’s rule of righteousness, but also constituted an infinitely meritorious act of obedience. Indeed, Christ voluntarily condescended from infinite glory to suffer infinite humiliation, to suffer the greatest trial of obedience ever experienced, and to bear the infinite wrath of God for the benefit of infinitely undeserving and hateful creatures. In so doing, Christ accrued infinitely greater merit on behalf of those for whom He died than Adam would have merited for His posterity had he obeyed. The death of Christ is the apex of Christ’s redemptive work, His greatest act of obedience, and the greatest display of God’s excellent perfections ever accomplished. In this one act of obedience the positive and negative righteousness required by God’s rule of righteousness are satisfied and infinitely exceeded on behalf of sinners. In this way Christ’s obedience to death was infinitely meritorious and ‘the most exalted part of Christ’s positive righteousness.’ (195-6)   —From The Infinite Merit of Christ

When given a full view of the fiery furnace in which He was to enter, He was “overwhelmed with the thought; his feeble human nature shrunk at the dismal sight. It put him into this dreadful agony…but his love to sinners held out.” Such would not be undertaken by Christ “needlessly” if the salvation of His elect could be accomplished another way, for “he desired that the cup might pass from him.” Yet, “if sinners, on whom he had set his love, could not, agreeably to the will of God, be saved without his drinking it, he chose that the will of God should be done.” He chose the furnace “rather than those poor sinners whom he had loved from all eternity should perish.” He did not grasp His glory “when the dreadful cup was before Him,” He did not claim His Father’s love to avoid it, nor retreat on account of the vile nature of His enemies for whom the cup would be consumed. “On the contrary, his love held out, and he resolved even then, in the midst of his agony, to yield himself up to the will of God, and to take the cup and drink it.” (220-1)   —From The Infinite Merit of Christ

All of Christ’s redeeming work on earth was undertaken on behalf of His bride for whom He acted as surety and representative. The Son freely undertook to stand for His bride in binding Himself to the covenant terms and took upon Himself a human nature and body that He might stand as their proper substitute and representative. In every propitiatory and meritorious act of His entire life of humiliation He acted on her behalf, and willingly drank the cup of God’s wrath in her place. In all this, Christ succeeded in meeting and infinitely exceeding the requirement of God’s rule of righteousness for which Christ and His bride would be rewarded. Therefore, Christ’s perfect obedience merited the salvation and exaltation of the elect. (227)   —From The Infinite Merit of Christ

Christ’s perfect obedience to God’s rule of righteousness redeemed His bride in the accomplishment of the ultimate purpose of God. He purchased her happiness that she might dwell with Him and enjoy the glory of Himself and the Father forever. The bride is thus brought into the most intimate of communion with God and made a member of God’s family. (241)   —From The Infinite Merit of Christ

By the infinite display of God’s excellent perfections in the infinitely meritorious obedience of Christ, unworthy sinners are brought into intimate communion with the persons of the Trinity. United to Christ in His humanity, the saints have an intimacy beyond which they would have enjoyed had Christ not taken upon Himself a human nature, as well as a greater intimacy with the Father in being united to Christ as the eternal Son of God. God designed that through “an intimate enjoyment of the Son,” saints “shall have a most intimate enjoyment of the Father,” so “‘our fellowship is with the Father, and with his Son Jesus Christ’ (I John 1:3).” (242)   —From The Infinite Merit of Christ