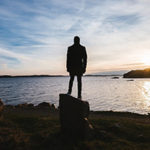 “In the beginning, God created the heavens and the earth.” Short and simple, yet the first words of the Bible set the foundation for a proper view of everything, the basis of a comprehensive and God-honoring worldview. Indeed, we see nothing rightly without first believing this basic truth about God. The following are a few of the many and important implications Genesis 1:1.

First, all time, matter, energy, and space began when God spoke them into existence: “‘Let there be light,’ and there was light.” “Let us make man in our image,” and here we are. “The universe was created by the Word of God, so that what is seen was not made out of things that are visible” (Hebrews 11:3). “By him all things were created, in heaven and on earth, visible and invisible, whether thrones or dominions or rulers or authorities—all things were created through him and for him. And He is before all things, and in Him all things hold together” (Colossians 1:16-17).

Second, only the Author of Life can answer the big questions of life, including how and why we exist and where we are going. God made us, He owns us, every good comes from Him, apart from Him we have nothing, and we owe Him everything. (If you are looking for a cure for the entitlement mentality, look no further.) Because God created everything, He forms the source and basis of all true knowledge of Himself, mankind, reality, knowledge, truth, authority, and how we should live. We depend on God for knowledge of all things.

Apart from His explanation of Himself and reality, we are reduced to guessing. Indeed, our knowledge and perspective are so limited we can’t even know the contents of a giftwrapped box in our hand unless we open it and look inside. Moreover, who among us has been beyond the three or four dimensions of earthly life or travelled beyond the edge of the universe? Thus, when unbelieving philosophers and scientists write thick books on the origin and meaning of life and ignore the God who created it, their theories reduce to opinions of blind faith. God’s questions to Job still apply: “Where were you when I laid the foundation of the earth? Tell Me, if you have understanding” (Job 38:4). Job replied, “Behold, I am insignificant; what can I reply to Thee?” (Job 40:4). “I have declared that which I did not understand, things too wonderful for me, which I did not know” (Job 42:3). Besides, atheists would need complete knowledge of everything in the universe and beyond to know that God does not exist. They would need to be God to deny God’s existence.

Third, “natural” laws are “divine” laws—how God orders and sustains the universe. No such laws exist without God’s power and control. Miracles, then, are not God intervening into reality, but His ordering something differently for a particular time and purpose. Thus, the wonder of God’s “supernatural” actions pale in comparison to His creating, continuously organizing, and upholding every quark, atom, and molecule in the universe. Why, then, would a professing believer try to make miracles compatible with unbelieving explanations of the world? Why betray a poor view of God and the revelation of His person and works in Scripture by explaining the plague of the Nile turning to blood by soil erosion, or the Red Sea as two inches deep where Israel crossed over? (Ask Pharaoh’s army how deep it was.) Do we grant that God can’t make the sun stand still (Joshua 10:13), because the continents would pile up when the earth stopped rotating, as argued in the movie, Inherit the Wind? God can create and sustain a universe and make the earth stand still but can’t keep the continents from piling up? And who knows how God did it? His ways are infinitely beyond ours (Isaiah 55:9). Moreover, we only know what God can and cannot do by what He has revealed to us, not to mention that one must first prove that God does not exist (an impossibility) to know that such miracles are impossible. Any and every biblical miracle appears reasonable in light of God’s infinite power.

Fourth, God and creation exist as God has revealed them in Scripture, regardless of what we believe. Imagine there’s no heaven or hell, and imagine that you can fly by jumping off a building and flapping your arms. You will soon discover that gravity remains unchanged, and depending on the height of the building, that heaven and hell did not go away, either. God and His reality will confront people regardless of what they imagine.

And lastly, while the implications of Genesis 1:1 are endless, we’ll conclude with everything God created displays His existence, goodness, power, and genius. “The heavens declare the glory of God, and the sky above proclaims his handiwork” (Psalm 19:1). “The whole earth is full of his glory” (Isaiah 6:3).

The wrath of God is revealed from heaven against all ungodliness and unrighteousness of men, who suppress the truth in unrighteousness, because that which is known about God is evident within them; for God made it evident to them. For since the creation of the world His invisible attributes, His eternal power and divine nature, have been clearly seen, being understood through what has been made, so that they are without excuse. For even though they knew God, they did not honor Him as God, or give thanks; but they became futile in their speculations, and their foolish heart was darkened (Romans 1:18-21).

As classic artwork displays the brilliance of the artist and surpasses the scribbles of a child, so God’s works clearly display His power and genius such that unbelievers “know” God, even as they hold Him in contempt and reject His authority. Further, God “did not leave himself without witness, for he did good by giving you rains from heaven and fruitful seasons, satisfying your hearts with food and gladness” (Acts 14:17). Every raindrop and bite of food declares His goodness. All people also have an inescapable knowledge of God because God has written His law on every heart (Romans 2:15). We live, breathe, and swim in evidence for God’s existence, power, genius, and goodness—evidence that calls us to thank and worship Him.

“In the beginning, God created the heavens and the earth” anchors right thinking about God and His universe. Ignore Him and all things reduce to pointless absurdity. But, created in His image, in His world, and redeemed from our sin by the perfect work of Jesus Christ, we are part of something glorious. May God, then, be our focus and joy, “For from Him and through Him and to Him are all things. To Him be the glory forever” (Romans 11:36). Amen. 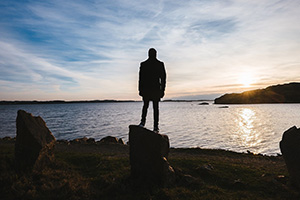 Yes, I Want a PDF of “The Starting Point and Foundation of a Proper Worldview”