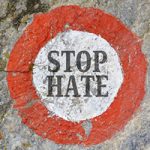 Several years ago, a nearby township designated itself a “No Hate” zone. More recently, “Hate Has No Home Here” signs have been popping up throughout the area. While the intent behind the messages may or may not be well-meaning, it seems a difficult thing to require and enforce. But beyond these difficulties, hate remains a necessary part of a healthy view of a life and world full of evil. And in a bit of irony, many bent on eliminating hate display a fair amount towards anyone who would question their viewpoint or appeal to Scripture as the ultimate authority concerning right and wrong. Campaigns against hate often disguise opposition to the Gospel (but I digress).

I was recently told that hate cannot exist in a God of love, that the idea of God hating anything was repulsive. When I pointed out that Scripture says God hates many things, he replied that the Old Testament God of hate cannot be the New Testament God. Of course, the God of the Old and New Testament are one and the same. God’s strict standards of justice revealed in the Old Testament, including the need for a mediator, sacrifice, and substitute for sinners, were fulfilled by Christ on our behalf and explained in the New (but I digress again). What about God, then, does He hate?

In short, God hates many things. For instance, He hates idolatry and the murder of innocents as sacrifices to false Gods: “You shall not behave thus toward the LORD your God, for every abominable act which the LORD hates they have done for their gods; for they even burn their sons and daughters in the fire to their gods” (Deuteronomy 12:31). “Neither shall you set up for yourself a sacred pillar which the LORD your God hates” (Deuteronomy 16:22). In speaking of the wicked who prosper at the expense of the righteous, “Like a dream when one awakes, O Lord, when aroused, Thou wilt despise their form” (Psalm 73:20). God also hates the denial of the obvious display of His power in what He has created: “For the wrath of God is revealed from heaven against all ungodliness and unrighteousness of men, who suppress the truth in unrighteousness, because that which is known about God is evident within them; for God made it evident to them” (Romans 1:18-19).

Moreover, God will repay His enemies and the enemies of His children: “Never take your own revenge, beloved, but leave room for the wrath of God, for it is written, ‘Vengeance is Mine, I will repay,’ says the Lord” (Romans 12:19). God hates those who spurn Christ: “He who believes in the Son has eternal life; but he who does not obey the Son shall not see life, but the wrath of God abides on him” (John 3:36). “For if we go on sinning willfully after receiving the knowledge of the truth, there no longer remains a sacrifice for sins, but a certain terrifying expectation of judgment, and the fury of a fire which will consume the adversaries” (Hebrews 10:26-27). God is the source and standard of good; He fights all that oppose it.

At the same time, God is perfect love, most clearly displayed in Christ dying for His despisers. “For one will hardly die for a righteous man; though perhaps for the good man someone would dare even to die. But God demonstrates His own love toward us, in that while we were yet sinners, Christ died for us” (Romans 5:7-8). Indeed, “While we were enemies, we were reconciled to God through the death of His Son” (Romans 5:10). Believers in Christ are the greatest beneficiaries of that love: “By this the love of God was manifested in us, that God has sent His only begotten Son into the world so that we might live through Him. In this is love, not that we loved God, but that He loved us and sent His Son to be the propitiation for our sins” (1 John 4:9-10). “And we have come to know and have believed the love which God has for us. God is love, and the one who abides in love abides in God, and God abides in him” (1 John 4:16).

Love and hate exist in God in perfect harmony. Why? A God of perfect holiness must hate evil, its enemy. A God of infinite love must hate that which destroys the object of His love. Here lies the simple explanation of why God pronounces such a harsh curse on all who would pervert the Gospel: “But even though we, or an angel from heaven, should preach to you a gospel contrary to that which we have preached to you, let him be accursed. As we have said before, so I say again now, if any man is preaching to you a gospel contrary to that which you received, let him be accursed” (Galatians 1:8-9). A false Gospel dishonors the person and work of Christ, the supreme object of God’s love, the supreme display of His infinite goodness, and the One who accomplishes God’s ultimate purpose to display His glory. A false Gospel leads people away from Christ and the Gospel by which they may be saved and enjoy forgiveness of sin, new life, and eternal happiness with God. God’s love for people hates that which leads them astray and destroys them. Thus, God hates sin. In addition to its ugliness and opposition to the beauty of His holiness, sin ruins people. True love hates that which hurts the object of God’s love.

The idea that love and hate are incompatible in God appears related to a worldview that denies absolute standards of good and evil. But, the love of good implies the hatred of evil, its opposite. Who would deny that we should abhor the wickedness of genocide? Who would claim that hating the cancer killing your dearest friend is incompatible with love? Indeed, to not detest some things contradicts true love. But, if nothing is morally wrong or sinful, nothing deserves our hate. Of course, even the most hardened relativists that deny an absolute moral authority affirm a boatload of moral standards for themselves and others, even while they hate a good many things. People often invoke pure relativism to justify a particular sin or lifestyle, but it is bankrupt as a philosophy of life. In fact, one must contradict it to affirm it when claiming absolutely no absolutes. No one lives according to pure moral relativism. Everyone hates something.

Therefore, because God loves and hates, so will we as we grow in our love and knowledge of Him through Christ. “The fear of the LORD is to hate evil; pride and arrogance and the evil way, and the perverted mouth, I hate” (Proverbs 8:13). For those alienated from God’s love by unbelief and the love of sin, “God so loved the world, that He gave His only begotten Son, that whoever believes in Him should not perish, but have eternal life” (John 3:16). And though many are the objects of God’s wrath, “‘As I live!’ declares the Lord God, ‘I take no pleasure in the death of the wicked, but rather that the wicked turn from his way and live. Turn back, turn back from your evil ways! Why then will you die…?’” (Ezekiel 33:11). Yes, God hates things, but only because He is a God of infinite and perfect love. 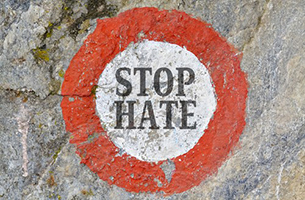 Yes, I Want a PDF of “God Is Love and He Hates Things”